There can hardly be civilizations without celebrations and the world created by The Skald is no different. These are some of the celebrations that may be encountered or referenced.

Updates may occur as we all find new reasons to party.

The list is divided between national and local festivities. Some locales always have something going on, while others may keep to a few a year.

Guild-related shops are closed and trade routes are rather bare, limited to time-sensitive offerings. Attentions are poised on the capital, Inizio D'Oro, where the guild leaders confer in their great meeting with the Primo Uomo. Many guilds and people alike pay close attention to who meets with the Primo Uomo, the length of the meeting, and try to gauge results before anything is officially conferred. This has become a long standing tradition, as many a time the power-struggle can shift, sometimes with favorable contracts, other times, with the announcement of a royal wedding, or even a coronation.

It is on this day that the plaza at the capital is filled with shoulder-to-shoulder crowds, waiting for the doors to open and for someone to take the podium.

In other parts of the world, it is a time of contemplation. Nobles, guild leaders, and other people of influence have their eyes to the sky and road, searching eagerly for their messengers carrying news of the results.

Beyond that, the day is normal and sometimes can make for a stressful day off.

"Stay indoors, stay indoors," the natives beg. "It's just one night. Don't look outside, just listen, listen. To the bugles, the brays, and the cries of unfortunate prey."

For a single night during a great harvest moon, terror runs free through the lands in the form of a fox hunt... and you are the fox.

Massive shadow hounds announce their presence and will tear through anything in their path to run you down. Their howls and barking are answered by horns and the galloping of hooves as wraith-like riders on nightmares come to collect their hunt. Little can bar their hounds from you if and when they find you. They are ferocious creatures, loyal only to their hunters, and can shrink and grow to fill spaces as they keep after you.

The natives will urge you to stay inside. The morning before they hurriedly paint the top their outside door and window frames with a band of rich purple to ward off the hunting party. They encourage any campers in the woods to stay the night at the local inn, or even offer them a seat in their own living rooms if just to get them out of the wilds for the night. For the sake of the visitor's life and the villager's conscious.

Even the animals are wary and it is their strange behavior that signals the coming hunt. Locals are attuned and will notice that suddenly there is no game to hunt, no birds to listen to... Just an eerie quiet...

The next morning the unheeded are mourned for. Some found may be found headless, some torn apart as though the dogs had gotten them... and few may be taken by some other means, as if their heart was unable to keep up with the demands. Others are completely gone, as if spirited away.

Badges that can be earned: The Fox and The Hounds, Lucky, Out of the Bag (Inaugural run only).

A turn of the year event when a stream of colors crease the night sky. These colors are believed to be the Song Coil of The Skald, an aurora gifted to only the Capital. The inhabitants of Inizio D'Oro host a black-tie gathering at the Prima Famiglia's manor courtyard. This is one of the few times they are exposed to the public in a more intimate and mingling fashion.

Fortune tellers will find a lot of work during this event.

A military festival to display the achievements of the guild and promote morale both within and outside the ranks. Hosted in the fields outside of the city for space, utilizing tents and strings of banners to mark locations and arenas of entertainment. This event has the potential to be multiple days and can also be used to announce graduations within the 'orchestra' including official placements of new recruits and the debut of First and/or Second Chairs. If a ball is held, it will usually be only for the guild and their plus ones.

A two-day festival celebrating the successes of the town's inventors and the 'official' start of a free summer. This festival kicks off with a parade of the accomplishments where the town's leader awards the best work. It is a little like a science fair and the whole town, no matter the type of work or experiments being done, has a chance to show off their greatest successes for the year. This is a great chance to impress, advertise, and network for many aspiring inventors and creators!

For the people of this alpine village, this also ends the work year with the reward of one season of fun and revelry (hence 'free summer').

The second day of this celebration finds the square filled completely with long benches and tables wet with spilled brew from steins being slid down the whole length to people. Food is simple things capable of being eaten without utensils, like brats on rolls, turkey legs, and so on. The winning invention is set up at the top of the stairs to the Zeithalle (the reigning guild's base) for all to see. On the stairs themselves is the musicians hired to play for the duration of the fest, keeping a loud and fast pace to encourage dancing-- if you can find room to.

Trivia: While the name of the festival translates to Progress Celebration, it is more commonly known as Inventor's Triumph.

A celebration of the receding waters that surround the hamlet, marking Spring's return. It is a grand welcome for the first cargo caravans and a time to give great thanks as sailors take their ships out of service for cleaning and upkeep. The party and market lasts about a week with guilds of all sizes participating in a contest of Flag Throwing, a sport where men show off their strength and acrobatics while waving and throwing large guild banners, entertaining the masses with their practice routines while the actual contest occurs at the end of the week.

The Flag Throwing contest is a bit like a dance off and can be done in groups, pairs, or singles.

Badges that can be earned: Winner.

A competitive day that loosely traces itself to the days of Stoneheart. All or some of the events will be available, per host. 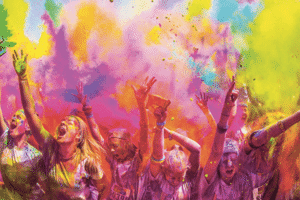 This is a mass knock-em-out match set within a circular space. The rules are painfully simple: last man standing wins, no weapons or magic. To make matters more hectic, every participant is given a belt of pouches containing various colored dyes that they can use to tag their opponents, creating a colored fog to make things even harder. It is added for fun and breaks up the white color scheme of the frozen wastes. Audience members can purchase their own handfuls of the powder to pitch into the arena in favor or hindrance!

A team on each side of a long heavy rope will pit their strengths against each other to try and get the other team to fall into shallow pit of icy water.

Archery: Five rounds with a d10:

Big Fish Who can snag the big one?! Who has the patience and perseverance to sit in the cold to do so?! Number of chances may range from 10 or more based on host's desire.

Audience members are not eligible.